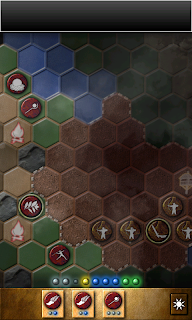 This has been a busy time for me--lots of travel, lots of activity at the office, a family member very ill--so it's been hard to find a few moments to work on Praetor.  But I'm continuing to make progress anyway, as much for my sanity as for any desperate desire to actually finish.

Importantly, after writing 57 of the 100 distinct battles in the game, I've finally added support for walled encampments.  The picture to the right is a live screenshot, as opposed to the mockup I posted last time.  And walled areas like this--I'm calling them palisades internally--are extremely cool in the game.

First, the ownership of a palisade automatically shifts based on who's inside it.  The one in the picture is red-tinged because my opponent owns it; if I manage to get someone inside, that tinge will go away to show it's open, and if I'm the only one inside it will turn blue.

Palisade ownership is important because those walls are normally impenetrable: nothing's allowed to go through them (though flying creatures can go over, and so can projectiles).  But if you're standing next to a wall you can step through it if the stuff on the other side isn't owned by your enemy--so if you're inside your own palisade you can send out sorties, and your men can even step back inside to safety where the enemy can't follow.

Better, catapults tear down palisade walls: in this picture you can see a catapult has already put a hole in the walls up north.  Creatures can walk right through there and suddenly the encampment is overrun: the red tint goes away because it's contested territory, and now everyone can sneak through the walls.

I'm still tuning this particular battle and I haven't written the code for the victory piece yet, but it's good progress.  57 battles done; when I get to 75 I can release this stage, and 100 is the whole game.  If the sales remain (comparably) strong I may actually make it there.  Praetor is slowly dropping in the Top Downloads list, though Praetor Free is climbing--and they're both ranked very highly.  Ad revenue looks pretty poor--something like $90 last month--but I'm still experimenting with ad mixes to try to improve that.  It's too early to tell if the price increase on Praetor has had a net positive or negative effect.

I'm a little frustrated with not having finished Praetor, partially because I've got some great ideas for the next game to write--including some ideas put together by my kids--and I want to get started on those.  But first things first: there are a lot of people who have paid for this game, and for their sake--and my own--I feel like I should keep pushing this one until it's done.
Posted by Richard at 9:58 PM